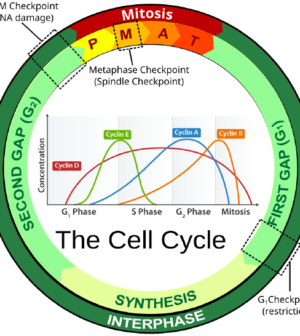 What is Cell Cycle

Cell cycle, also referred to as cell division, is defined as the series of events that generally take place in all living cells leading to its maturity and subsequent division.  There are two different ways in which a cell divides to form new cells and it includes mitosis and meiosis.

The complete process of cell division was first observed and discovered by Prevost and Dumans in the year 1824, during their study about the cleavage of zygote of Frog.

Mitosis is the process in which a cell is divided into two daughter cells each having the same number and kind of chromosomes as the parent cell. This process is also known as somatic cell division because it takes place in the somatic cells. The complete process of mitosis occurs in four different stages.

The process of mitosis begins after the DNA in the cell is copied, resulting in the formation of two sets of chromosomes.

The different stages of mitosis are:

In this stage, the chromosomes are paired up in an X-shaped structure.

The paired chromosomes are attached to the mitotic spindle fibers and line up along the equator of the cell.

In this stage, the sister chromatids are pulled at either pole by the spindle fibers.

This is the last and the final stage of the mitosis cell cycle, in which a full set of chromosomes combine together at each pole and a membrane is formed around them, which results in the formation of two nuclei. Hence, the mother cell separates in the middle and two daughter cells are formed. This process is also termed cytokinesis.

Meiosis is a process of cell division, which is carried out in all multicellular eukaryotic organisms. It is a sexual mode of cell division process in which a mother cell divides twice to produce four new cells. Each new cell comprises half the number of chromosomes as that of the mother cell.

The meiosis process is responsible for the formation of reproductive cells in all sexual organisms, which undergo sexual mode of reproduction, such as plants through the spores and animals through sperm and eggs.

Meiosis is broadly be classified under two categories and each category has nine different phases:

Meiosis I: This is a stage in which the mother cell is divided for the first time.  It contains phases such as:

Meiosis II: This is a stage in which the mother cell is divided for the second time.

It contains phases such as:

This concludes the introduction to the cell cycle and its different stages. To learn more in detail about the cell cycle, its process, features, significance and other related biology topics, students can visit us at BYJU’S Biology. Students can also learn by watching interesting youtube videos by subscribing to our BYJU’S youtube channel.